Posted on 26. November 2016 by Lindhardgaming

Hi everybody reading this Blog

I have been to the cinema to see Dr. Strange.

Well it had premiere a long time ago you say ?  i know that, but hey never to late with a personal review from me.

I did not have any expectations when decided to see this movie with my girlfriend and som mutual friends, we all like the marvel Universe and we love the supernatural, so this movie was according to the trailers very suitable for us, hey we just wanted to enjoy it, no strings attached.

As the movie started we talked about that this might be inspired a little from Mage: The ascending the roleplaying game, but we will see, lets talk after the movie and decide if that was the case.

so to the movie, classical entrance to a marvel movie although been renewed with small clips from the avengers, CPT. America etc while running the MARVEL intro, cool enough.

The Evil Kaecilius is fighting a woman Dressed in white trying to get away from stealing a very special book. 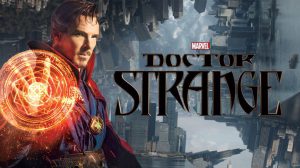 In Dr. Strange we follow Dr. Stephen Strange, who is a phenomenal surgeon, his hands are priceless it is his living to use his hands, he lives and breathes to not hurt his hands, but he still live the life of a rich kid having fun expensive cards, a ladies man without him self knowing it.
He wont take no for an answer when it comes to Surgery he think that he can do whatever that needs to be done in a operation no matter how hard it is to do, he wanna do it.

Dr. Stephen Strange as bold and playful he is, is going to a party and this is where the movie speeds up, Dr. Stephen gets into an accident literally squashing and hurting his hands.
He is desperate as the surgeon who patched him together was not as good as him at least that is what Dr. Strange is thinking.

Now Dr. strange need to find himself again after the accident, his journeys lead him to Kamar Taj in the Himalayan mountains where he needs to learn self discipline and learn the mysticism of other dimension and how to make his hands work again, he is a doubtful man when he arrives and does not believe most of what he sees.

But Dr Strange man up and start living and controlling this new found abilities including a new enemy in Kaecilius which path he cross while training and testing things with this new magic. he learns that this is more focus he needs to learn more than he ever imagined.

But lets see if Dr. strange can win the fight with Kaecilius and help The Ancient One in the battle against evil.
During his stay in Kamar Taj Dr. Strange come upon a Necklace (the one on all the pictures) which allow him to turn back time, hmm Actually it allows him to control time, one of the most powerful things you can have.

Dr. Strange is not as story driven as i would like, as it is basically the story of the Fall and rise of our Hero as we have seen in so many movies before this. The movie is true to that all the way through it is somewhat classical good vs. evil with a twist.

This movie seems to be driven by some kind of master plan for Marvel to introduce Dr strange, and who he is, and where he come from, which they manage very good in my opinion, They build up Dr. Strange for the whole movie, making him somewhat meet his nearly full potential, i can say it left me with the feeling that i want to see more Dr. Strange and future adventures

All i can say is i liked this movie and as i say it is Marvel so keep watching after the credits. you will see a small clip as usual, maybe 2 !