The game is basically about to people battling in outer space, with the iconic ships from the star wars movies, the X wing and Tie fighter great ships all around good looking and fun to play.

what i find fascinating with this game is that it is so unpredictable when you play against each other, this is a game which is easy to play but hard to master, because when and if you play tournaments you will really have to learn things about each ship, not 100% but at least so you have a basic knowledge of how that ship moves.

For starters i would recommend playing small games without upgrades, and then slowly start using upgrade cards there after. If you have played games like Warhammer, Warhammer 40k, or another game where you would need to buy yourself an army or a squad i think you will learn how this game works when you need to build a squad, where you have an amount of points agreed upon to build you squad. 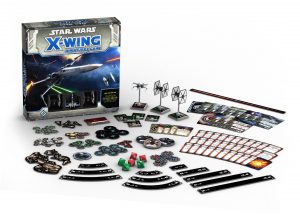 You can play and build squads from 3 different factions.

Rebels: The ones with Luke skywalker, Chewbacca and Han Solo. Etc

Imperials: The ones with Darth Vader and Soontir Fel Etc.

Scum and Villainy which have some scum like Bossk, Greedo and Boba Fett

And you can only Field one faction when you play, but Fantasy Flight Games know how to make money so off course they have put Upgrade needed by all factions in different ship expansions so if you get hooked get ready to research which ships you need to by to get your upgrade cards for your list.

This hobby really excels with the community, i personally have played about 1½ year now and i think the Danish community where i play is a really great one, and everybody was really really helpful to me when i started playing, answered any question i had about the game, always nice to people like one big happy family, and they kept telling me this game really shows its strength when playing in a Tournament, a tournament is a great way to learn from the best in the game, and in Denmark where i play the tournaments are so earth bound, that everybody still helps each other, if you got a question we help each other, and what i have heard from other communities around the world it is the same all over, very good and nice people are playing this game.

I can only say get to it!  start playing !  go have fun ask around search Facebook for groups in your local area, and buy a starter set and show up and talk and mingle with people.
My bet is that you will get new friends and people to talk to. which also is good for our social skills you know.

grab your gear find a place to play don’t be shy.

Feel free to contact me for any questions you might have and i will try to answer them as fast as possible.
either by write a comment here or by email : business@lindhardgaming.dk