Posted on 29. November 2016 by Lindhardgaming

Yeaarrhh How are ye doin matey 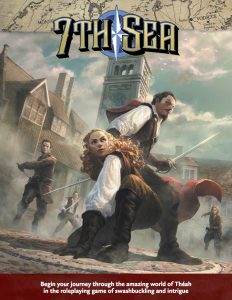 7th sea Role playing game is a fabulous role playing game, with pretty simple rules, this is one the most simple rule sets i have ever seen, straight from creating a character to playing the game. this game lets you do what you want, there are a minimum of dice rolls, you will need to learn how to describe things though, this is where this game got its strenght, you will learn to describe what you are doing when fighting, talking etc in here.

You will chose from the following nations when making a character, as you dont have specific races other than Human in this game.

Avalon: Green and enchanted, this union of three kingdoms has recently risen to the forefront of Théan politics under the leadership of Queen Elaine.

Castille: Headquarters of the Vaticine Church, this fertile nation was once the home of science and reason, but it has fallen under the spell of corruption and fanaticism.

Eisen: A proud yet broken land, Eisen is a nightmare brought to life by three decades of mass murder kept at bay by heroes as dangerous as the horrors lurking in the Nation’s shadows.

Montaigne: One of Théah’s most powerful nations, Montaigne leads the world in art and culture even as its Emperor crushes the populace beneath his thumb.

Sarmatian Commonwealth: Two nations bound by a single crown, the Commonwealth is a democratic monarchy where all people are equal, even kings.

Ussura: A Nation torn between traditional isolationism and an ambitious ruler who will do anything to drag his Nation into the future, no matter the cost.

Vestenmannavnjar: A Nation of raiders and warlords who conquered the world’s economy by hammering their swords and spears into coins.

Vodacce: The former cradle of civilization, Vodacce is now split between seven merchant Princes whose complex and nefarious schemes reach every corner of the world.

When you read about them you will quickly be able to see the parallels to our own world, which i think is very cool as we had pirates back in the old days as we all may know, but without the magic.

Yes there is magic in here also and it is probably the hardest thing to play with but still not difficult once you get the hang of it. 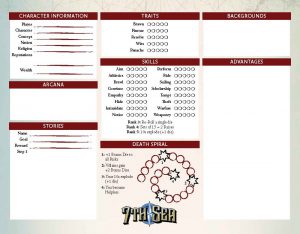 You start by choosing your concept for you character then choose your traits then where you are from, get a background, choose your skills and advantages , then choose what they call arcana. Then pick a story and stories are very essential in this games as this is your way of gaining skill points and new skills/advantages etc. and last but not least THE finishing touches, all of this gives you 8 steps to complete and then you are ready to go pirating in the 7th sea. so pick up your saber and go plunder.

It is that easy actually the stories is a reformed way of XP thinking and i like it, your story is telling the GM what steps you need to fulfill to get a new skill or advantage, lets take an sample story for a 3 point advantage.
Lets pretend i wanna be a Bar Fighter (an advantage in the book) i would write something like this

1: Go to Dunkeen and confront the master of all trades to learn about who is the best fighters in the bars at the moment.

This is a very boiled down 3 step story, but nonetheless this is how it is done, you can be as creative as you can, this is also forcing the GM to take action on characters in this game, learning to communicate with players instead of just tossing monster in their heads at all time they wants to talk with someone important.

So once the GM decides to let you go through those 3 steps and you fulfill them, then you get the Advantage Bar fighter. so simple this is, you choose what you want and you get it, no levels and other demanding stuff in this game

Another thing which is very very good in this game are what is called hero points, which gives that extra dimension to the system and game, every player Starts every new game session with 1 Hero Point, In our group we use some black stones you can buy nearly en every gaming store, or something else you find useful to symbolize a hero point.

A game master starts with danger points the opposite of hero points, and he starts with one for each player attending this game session.

now what can these be used for both by the player and the GM.
I will tell you right about in the next sentence

A hero can use his point to Activate an advantage which have a little K in a circle besides its name this means the advantage is a Knack which usually requires the hero to spend a hero point to activate it, or he can choose to gain bonus to his next d10 roll (only D10s is used in game) or he can choose to help another Character by giving him 3 D10 for his or hers next roll.

And next up is how do you Earn Hero points, if you can earn them ?

YES you can earn hero point either by Activating your Hubris which you have chosen under Arcana step in the Hero creation or simply just by saying my hero fails i wont do anything this scene. The GM can also buy any unused Dices in a scene situation which gives you 1 hero point to spend.
You can spend multiple hero points in a Scene just not on the same thing.

What About the GM and his danger points ?

Well he can use it to kill your hero, oh wait not unless your hero is helpless (i will talk about that in a sec)
He can also use Danger points to make it harder for the heroes to hit a success when rolling Dices, boost his own villains and brute squads, and activate special abilities. 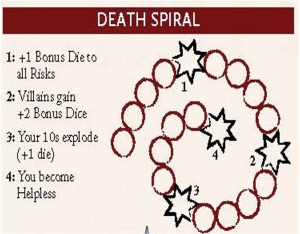 Ok Lets talk about wounds as i mentioned earlier the GM can use his danger points to kill a hero if that hero is helpless.

From the picture above you can see the wounds you can take, every hero got the same amount of wounds/hits they can take before going helpless, unless you have an advantage that states otherwise.

For every dramatic wound the game gives either a bonus or a non bonus to your hero, as you can see when you reach your first Dramatic wound you will receive 1 Dice extra to all risks for as long as you have this wound.

That was wounds covered Now lets talk about risks in the game, A risk is when you roll dices and you only roll 10 sided dice in this game.

Lets say you need to fight in a bar fight as mentioned earlier, the GM will probably say to you to use your brawn trait and your Brawl skill you take as many dices as you have skill points in these put together and then you roll and for every time you have a total of ten you have a success, and any number of dices left the GM can buy from you so you can gain a hero point from that.

The GM then states how many success is needed for you to take a swing at an opponent or to just make 1 damage for each Success you have.
Once you have decided what to do you tell the GM and describe it to him/her so he can take notes and further expand the scene.

that was currently all i had to say about this except for one more thing.
The System is pretty simple !

So i can only recommend you to try this roleplaying game , i would actually say this System is great for beginners who wants to learn to tell a story, and make your own story.

Just tell me what you think in the comment section