Posted on 29. November 2016 by Lindhardgaming
Hey, introduce yourself.
Hello, I am well me! I have been playing games since forever, starting with games such as Warhammer 40k and Warmachine and now playing X-Wing miniatures, Imperial Assault and just picked up Star Wars Destiny. As you can see from that I live the Star wars universe! And I collect all sorts of things Star Wars including bobble heads and logo! So games like X-wing naturally appeal to me, I did give Attack Wing ago… that was a hour I will never get back!
While playing the game something I have always enjoyed was blogging (Fishy Wargaming – Www.fishywargaming.com), while I don’t get as much time these days we have a great team of writers for various games including X-wing, Imperial assault, Destiny, Guildball, Warmahordes and more.
Is this your first tournament?
Nope, I have been to way to many!
How many tournaments have you played ?
That’s not easy to answer if I am honest, most months I play around 2 tournaments. So I reckon 50+ would be a good guess.
When did you start play?
As wave 3 hit I joined the game, I had been playing before with other player’s miniatures to learn the game and as a Star Wars fan the game instantly appealed to me.
Why Did you wanna go to Yavin Open series ?
I went last year as it was the big event at the Games Expo, and wow it was such a great event, it was well run. So as soon as they announced it again I was booking my hotel and ticket!

What are your expectations ?
There are always so many great players at these events and so I never go in expecting to much, but I always like to make the second day, which would be the same as I did last year.
This year to make the second day the 5-2 requirement will be tough, so if it starts going wrong I am finishing a bar! Everyone is welcome to join me!
Any thought on your list at yavin yet?
I am actually looking at ideas now, with wave 10 about to drop and Defenders running around everywhere, the list has to be able to take on a mix of list types.
A lot more testing needs to be done before I settle on a list, but as always I will look to fly Rebels, and when that fails I will end up taking Scum!
What Meta do you think will be at Yavin?
Hard to say with wave 10 around the corner but I don’t expect Defenders to go anywhere just yet, so I expect a lot of high firepower list to try and break the Defender’s token stacks!

What are your thoughts on the new Tournament structure from FFG (if played Long)
I actually like the ideas of splitting apart the Star Wars events from other games, it allows players to play other games without everything turning up on the same weekend.
Any players you look up to ?
Interesting question and not one I have ever thought about before, I don’t think I look up to anyone but there a few people I will mention.
Scott Wilson – He  is one of the most well known community figures in the UK, setting up a great opportunity line community, which helps players find events, talk about lists and tactics.
TOs – Anyone who give support their time to run a event should be celebrated and respected.At the end of the day they give up their time to sit around and look after the players!
Lee Williams(Cloud City Radio) – Lee is a great guy who always seems optimistic and always is so dedicated to bringing players updates and live streams from events. 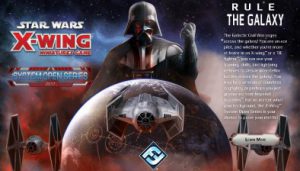 And good luck at Yavin.
See you there, good luck everyone!
And Take a look at Luke’s Blog Fishywargaming

This entry was posted in Interviews, Star Wars X-wing. Bookmark the permalink.