How to Play Series: Mice and Mystics

Posted on 8. April 2017 by Lindhardgaming

Welcome to this little walkthrough of the Mice and Mystic boardgame. 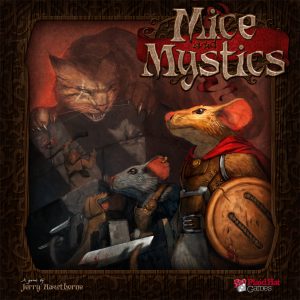 About Mice and Mystics

What you need to know. To start playing Mice and Mystics, is that this is a story driven somewhat, RPG based board game. where you can act out your inner heroic mouse. And save the fair maiden from the evil rats.
This is a game which actually starts, at a point where all of your Mice. Just have been transformed into, yes Mice.

Which brings them onto, their first adventure. In this amazing board game for ages 7 and above. And many other adventures, but before we will have a look, at how to play the game. Let me tell you about, what is in the game box, once you open it.
Here you will find, some amazing miniatures, which is very good designed, and is very paintable, with one little, but anyway big BUT, they are made of such soft plastic that paint over time will fade away, and if you bend the miniatures, (yes they are flexible) the paint will crack, if you compare to other board games, like Mansion of Madness, where the miniatures are made from hard plastic, and is much easier to make paint stick onto.

But in my opinion, this is just a small negative thing. Because the other stuff in the box is quality supreme, the cardboard tiles, are very cool painted. And the motives are fun and cool designed.
And the general design, of the parts in the game box in Mice and Mystics. Are very good, and in the box you get the following.

This can be upgraded with two expansions. (even three with The “sister” game Tail Feathers), where you will get more miniatures, new Mice to play, more tiles, and more adventure for your Mice to go on.

But now it is the time, you have been waiting for. How do you play this game, look below and read all about it.

Rules of Mice and Mystics.

To start playing Mice and Mystics, You will of course need to read the rules. And I will help you with the basics right here. First you will need to learn how the turn sequence function, what actions you can take as a mouse. And what actions an evil rat can take, when it is the monster fase. So let us take a look at what actions you can take.
A mouse can on its turn Make use its movement and take an action or the other way around, and how do you move around.

A mouse can take the following Actions during its turn. Before or after it has moved.

The rules a really this simple. Make and action and take a move or take a move and then an action.
And you will need to move the Minions also. But this is exactly the same as your mice, they got a move action and a battle action, they can of course not do any other actions like search, double move etc.

In My own opinion this game is easy to get started with. And of course you will need to be able to read and understand written English, to read the rules. I will not go deep analyzing on the rules, because I don’t want a complete write up of the rules here on my site, you can actually download the full set of rules on plaidhatgames.com*.

Example of some Tiles in the game: 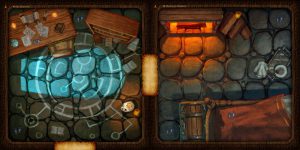 Tiles from Mice and Mystics

So the setup is simpler than the rules, because you don’t have to memorize them at the same amount as the core rule mechanics.
Once you have setup the starting Tile you are good to go, and take you Mice onwards to the adventure that waits in front of you.

So the setup is shot and effective, and fast because you just need to follow what the booklet says, which make this game easy to start easy to play.

Playing a game of Mice and Mystics

First take a look at the dice, you need to learn their symbols for optimal use. 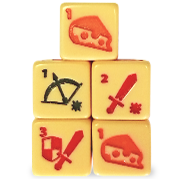 Dices from the Mice and Mystic game

During play you will of course move and take actions but also let us talk about “how” you move.
On you character sheet, you will see a little green foot and a number besides it you Move by rolling a dice and checking the little number in the upper left corner of the dice, you then add that to your movement stat, and that is how long your Mice if moving

Check out Tilde and look for the green foot on her sheet. 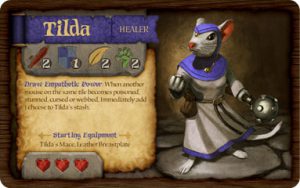 Tilda A character from Mice and Mystics

And Lets talk about the other number

Every character also have their own special ability, which is noted on the character card, alongside with any starting equipment, your chosen mice may start the game with.
I learned, that you need to read those abilities, and learn them because you will need them, during the game, so be aware of them.

Conclusion of Mice and Mystic

In my oppinion this is a fun and great game. It is easy to go to, easy to get started, and once you learn the mechanics it is very very simple to play, just be sure to setup the right mood for the game, which will make it a lot more fun, maybe even put a little roleplaying into the game, talking and living your Mouse.