What is the TIE striker?

The TIE striker is a ship, first seen in the new Rogue One movie, it is another TIE(twin Ion Engine) ship from The Empire, and is a part of wave 10, for the Star Wars: X wing miniature game, and already after the movie, someone would make fun of this ship, because it can actually, flap its wings like a bird, so there was, much fun in that, it was a mini cartoon make for YouTube I think, but nevertheless us X wing players have it as a playable ship in our fleet now that is has arrived to the stores.

So if you live in Denmark, you can buy it at Dragons Lair, Just click the Banner for a direct Link to the TIE striker.*

The TIE Striker Move Dial, is it good? 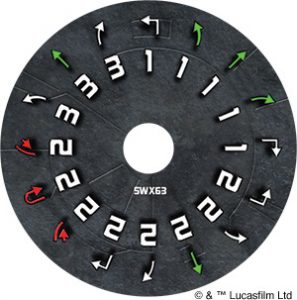 You your 2’s all of them which also adds to the TIE striker maneuverability, and bank 3 and straight 3 on top of that.

So your move is quite good to get around corners and ships, combined with the barrel roll you got a nice combination for moving around you could maybe put engine upgrade (insert link here with popup )on the the ship, but that might just be overkill and not so good spend 4 point, all I say is that you could.

Will the TIE Striker be a competitive Ship?

That is a good question and I cannot tell yet, I think someone will field in a tournament, but if it is any good on the tournament scene, I could not say at this point, but I can see some opportunities, in the ship and the maneuverability, and when you field. 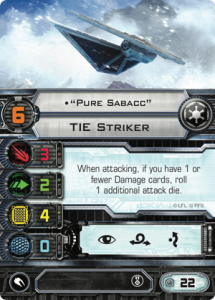 You will have 4 attack dices, so maybe combined, with Veteran Instincs, then I think this would do very well with the survivability, and you could take the title Adaptive Ailerons, and do the “free” boost before you move, ofc.  you would have to take that boost, that could be a minor setback in some situations.

I Did see a fun combination when i was playing in Faraos Cigar in Copenhagen, where you would Field a PS 4 TIE Striker  like this 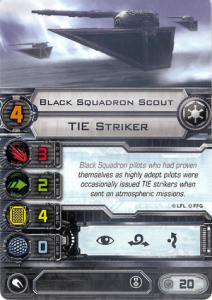 He Then had Echo, and Whisper besides him, always taking Evade, with those 2 and that would, eventually in most cases, give 2 extra attack Dices to this black squadron, it was a fun list to play against.

What is the TIE Striker’s Weakness as I see it?

The weakness of the TIE striker, will in my opinion, be the agility of 2, and only 4 hull, this ship needs to stay out of arc, and really be aware, of where the opponents ships, are hiding, because this ship is fragile out of the box.

But ofc. you can make it stronger, by using some of the very nice upgrade cards out there, as I described before, and that is where, I will say that this ship, need its upgrades to survive, but think someone will try, to field a swarm of these with no special upgrade cards on them.

You could actually field, 5 of them in one squad, even more, if you take a pilot skill, lower than 4, so I am sure that there, will be small swarms of these out there, at least just for fun, and I am sure someone, might go for a crack swarm of these, or maybe even, with a small support ship, by its side who knows, there are some creative people, out there in the x wing community.